All Kaporos photographs featured in these posters are by https://www.unparalleledsuffering.com.

Dear Friends of UPC and the Alliance to End Chickens as Kaporos,

At this moment, hundreds of jumbo posters have been pasted up all over New York City exposing Mayor de Blasio's shameful lack of action on the mass ritual slaughter of chickens, known as Kaporos!

The cost of printing, installing, and maintaining these posters is $10,000. Please help us cover this cost with a generous tax-deductible donation:

Over 100 jumbo posters are in neighborhoods across Manhattan, Queens, and Brooklyn at over 50 sites. In Brooklyn, these neighborhoods include Williamsburg, Park Slope (where some city officials live), and Crown Heights – the city block where the majority of thousands of suffering, starving, dehydrating and dying young chickens are stuffed into massively stacked-up transport crates. Why?

The chickens are being held to be symbolically filled with the sins of the practitioners and substituted for the punishment practitioners claim to have earned over the past year according to the script recited while each chicken is being painfully swung by his or her fragile wings:

“This is my exchange, my substitute, my atonement. This chicken shall go to its death, but I shall go to a good, long life, and to peace.”

Each chicken is then slaughtered on an open-air table, stuffed dead or alive in a traffic cone supplied by the City (even though the ritual violates the City’s many health codes and is illegal), and is subsequently thrown, dead or alive, into a plastic garbage bag with other dead and dying birds, and trucked to a landfill.

The majority of Jewish people in the U.S. and throughout the world, including many outspoken Orthodox rabbis, do not practice or condone chicken Kaporos. It’s medieval custom, not a mandate.

Meanwhile, Mayor de Blasio has sent mixed messages about the COVID-19 response. The week of September 21-27, Kaporos chicken swinging and killing will take place on New York City streets still reeling from the ravages of the coronavirus.

If a pandemic that started in a China “wet” (live animal) market could kill tens of thousands of people already, what virus might mutate and spread as a result of Kaporos in New York City, risking visitors and residents alike?

Your contribution will help us put up more of these striking jumbo visuals and keep them going up through the entire month of September to alert the public, alert the media, and hold Mayor de Blasio accountable. Please support this high-stakes awareness campaign today!

Include this note with your donation:
"NYC Mayor Posters"

Thank you for your support!
United Poultry Concerns & the Alliance to End Chickens as Kaporos 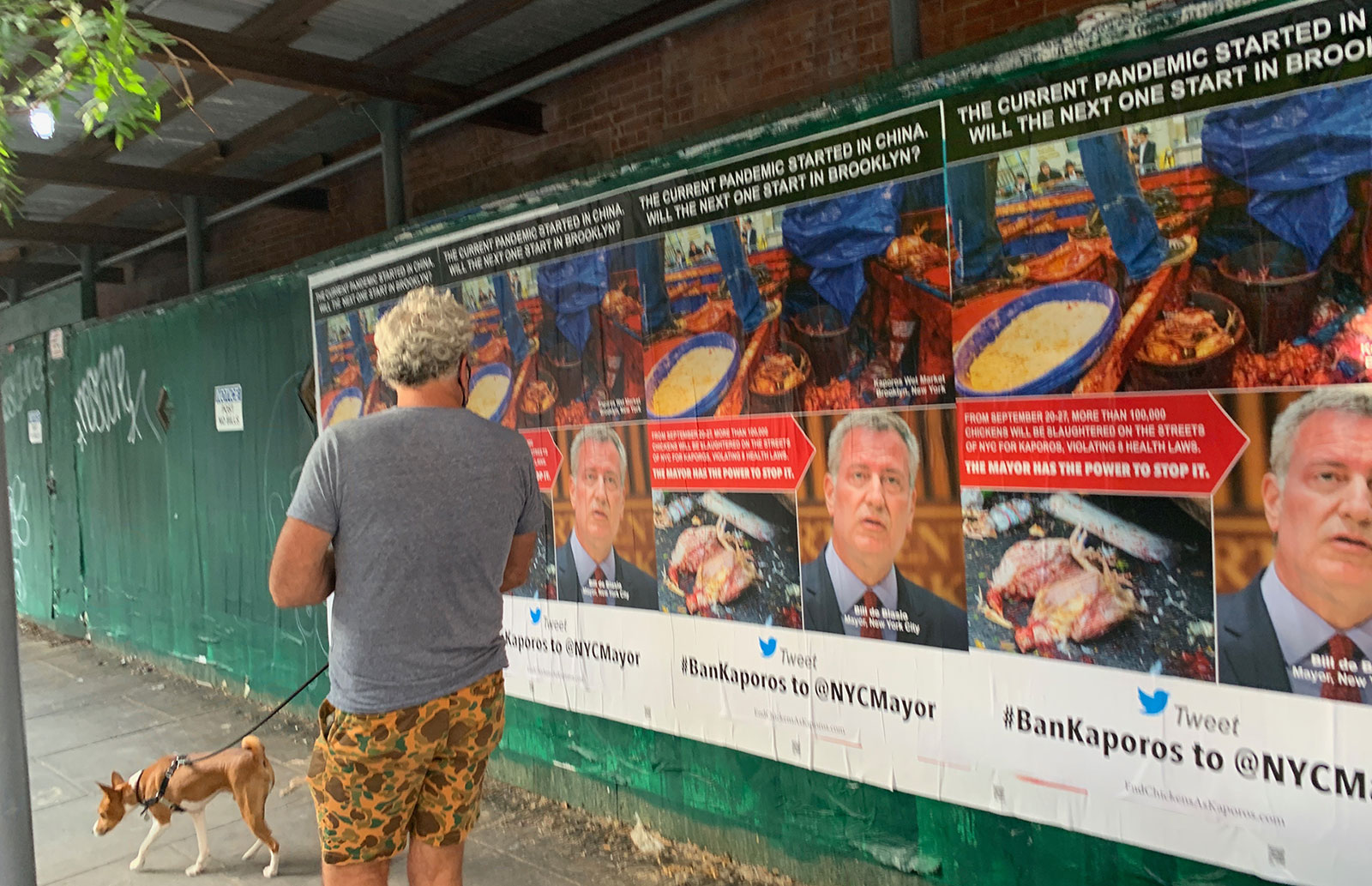 All Kaporos photographs featured in these posters are by https://www.unparalleledsuffering.com.